The Tomb of Angela Castriota Skanderbeg in S. Sofia, Gravina 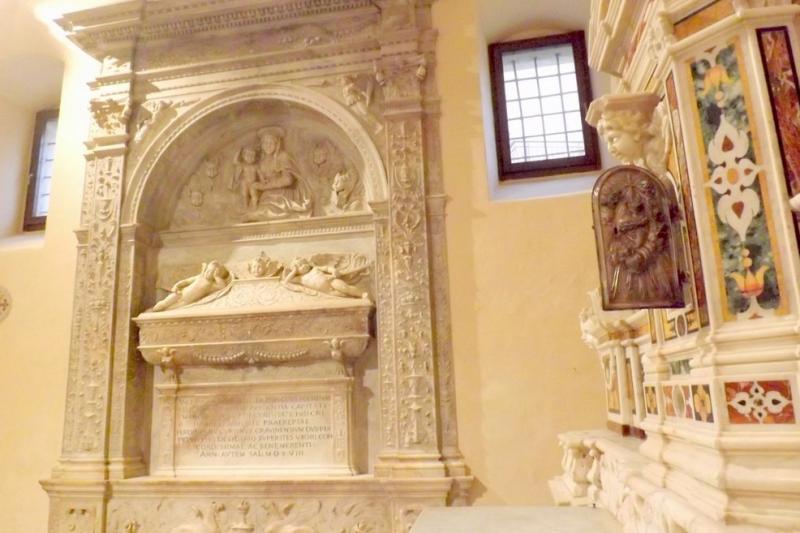 Just when Ferdinando Orsini, the Duke of Gravina, commissioned this tomb for his late wife, Angela Castriota Skanderbeg, is uncertain, though it probably happened shortly after her death in 1518. The monument, described by Clara Gelao as “certainly the most important example of Neapolitan Renaissance sculpture in Puglia,” stands out in a city that, though the most populous in the region, found itself impoverished under the Spanish dominion established in 1492, which nominally preserved the rule of local dynasty even while reducing them to figureheads. More than 21 feet high and made of Carrara marble, there is nothing comparable to the tomb in Gravina from this period.

The church of S. Sofia was an ancient one, dating to the years when Gravina belonged to the Byzantine Empire. In the late fifteenth century, the church became the center of a community of immigrants from Albania, fleeing the advance of the Ottoman army. Castriota must have felt a connection to this congregation, as she herself was a descendent of Gjergj Kastrioti, Lord of Albania, who had represented King Alfonso V of Naples in a decades-long war against the Turks. In the first decades of the century, she and the Duke had restored the interior of the church and added an adjacent convent. Ferdinando had the tomb installed to the left of the high altar in the renovated space.

The tomb adheres to an aedicular form common in Renaissance Naples. A base, ornamented with hippogriffs and vegetal motifs, supports a blind arch flanked by engaged pilasters; an elaborate entablature is crowned at its center with a wreathed coat of arms. Classicizing Victories in the spandrels hold wreaths over a lunette with a relief of the Madonna and Child and cherubim. This surmounts the sarcophagus, on which putti with extinguished torches recline. All of the architectural surfaces are bedecked with garlands and grotesques. The inscription, in fine Roman majuscules, celebrates the religion, modesty, prudence, charity, gentleness, and fecundity of the deceased, “snatched while still young by death.”

It was comparatively rare in early fifteenth-century Italy for a marble tomb of this scale to be dedicated to a woman, though two of the most prominent recent examples were similarly for women of Eastern origin. In the Vatican is a 1487 tomb dedicated to Charlotte of Cyprus, who was recognized by the Papacy as the rightful Queen of Jerusalem and Armenia but who died in exile in Rome. In the Roman church of S. Maria in Aracoeli is the late fifteenth-century tomb of Caterina, who had been Queen of Bosnia until its conquest by Mehmet II in 1466. The Orsini of Gravina maintained close ties to Rome, and Ferdinando could well have known or known of these monuments, as well as one produced by another branch of his own family, the tomb that Rinaldo Orsini, Archbishop of Florence, had commissioned to commemorate his mother Maddalena.

Equally remarkable, with regard to other Renaissance wall tombs of this size and complexity, is the fact that the tomb includes no effigy. This absence invites a question about the broader geography of portraiture in the sixteenth-century Spanish world. On the Iberian peninsula itself, portraiture would be the premier artistic genre, attracting Titian, Anthonis Mor, and others. In the viceroyalties, however, might portraiture, at least of the kind familiar from the royal court, have been much rarer?

The absence of a portrait from the Castriota Skanderbeg tomb also invites consideration of the practicalities of production in the Spanish realm. Most modern writers (Abbate, Negri Arnoldi) assign the tomb to a Neapolitan workshop, perhaps that of Gian Giacomo da Brescia. If they are right, blocks of marble would have first been sent down the coast from the Tuscan quarries to the vice-regal city. After being carved there, the blocks would have been transported through the mountainous roads across the peninsula, to be assembled finally on-site in Gravina. Expert carvers would have needed little information to carve much of the tomb: for the grotesque ornaments and the putti, the team could have drawn on a common vocabulary of Renaissance sepulchral design, and for the coats of arms and the inscription, they could have followed specific instructions and a simple diagram. A portrait, however, was another matter. Given the limited local tradition of portraiture, it may be that no rendering of Castriota’s face had been made before her death.