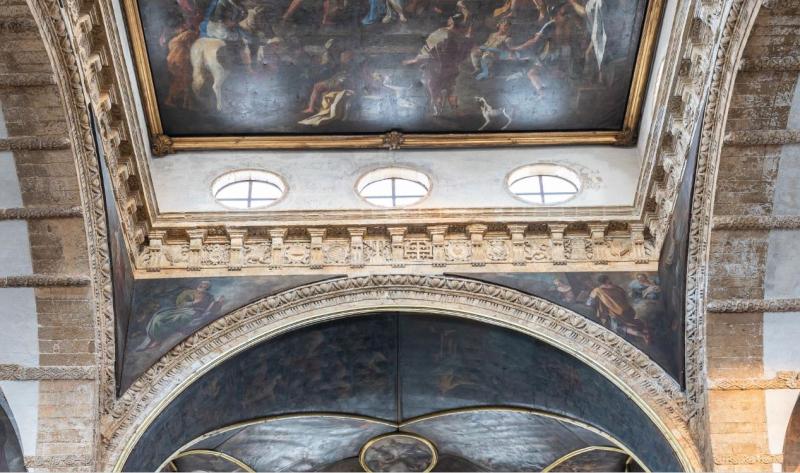 Seven years after the Spaniard Gonzalo de Rueda (1580–1650) was appointed Bishop of Gallipoli in 1622, he ordered the complete demolition of the city’s cathedral, a building described by travelers as small, indecent, and nearly a ruin (Ravenna 1836, 317–18). The construction of the new cathedral was part of de Rueda’s renovation project for the dioceses of Gallipoli, where the physical building and the lay and religious communities were meant to be aligned with the mandates of the post-Tridentine Church.

The decision to commission a new project for the cathedral at Gallipoli was well advanced when, in 1628, local physician Giangiacomo Lazari bequeathed a generous donation for its construction upon his death. That same year, de Rueda commissioned from Gallipolino architect Giovanni Bernardino Genuino (1596–1642). The first stone was laid in 1629. During the following twenty years, Bishop de Rueda ensured the steady progress of construction, and, by the time he left the position in 1650, the central nave, side aisles, central dome, and right arm of the transept had been erected and roofed. Before the interior decoration was completed, the building was already in use. De Rueda’s successors continued the work and the cathedral was completed in 1659.

The building Genuino designed for Gallipoli is organized along a basilical plan following the norms of post-Tridentine religious architecture (Fig. 1). A short and wide nave is separated from the aisles by four stone arches supported by Doric columns either side, which have been set in pairs at the crossing. The arches spring from imposts carved with a double row of Corinthian leaves. On their faces, the arches are decorated with the egg-and-dart motif under them hang stone festoons that continue on the star vaults over the aisles. Above the arches of the nave, stone architraves with metopes, triglyphs, and deep-projected cornices separate the lower level from a clerestory of large square windows that illuminate the flat wooden ceiling. Four large arches make the transition between the vaulted ceiling of the transept and the flat roof of the crossing, which is surrounded by an entablature echoing that of the first order (Fig. 2).

The arrangements of paired columns at the crossing and the carvings on the nave’s vaults resemble those at Santa Croce and Santa Irene in Lecce. The choice of a Doric entablature is exceptional the . In Gallipoli, the metopes depict the history of the relic of the breast of Saint Agatha, the city, and the building; yet, because of the instances represented, they can be interpreted with a Spanish overtone, probably the result of de Rueda’s supervision of the works.

The metopes in the main nave depict symbols associated with Saint Agatha, such as the pincers and the palms of her martyrdom (Fig. 3). Although other local devotions are also represented, special importance is given to the story of the arrival of the relic in the city after it was stolen from Constantinople by two sailors (one originally from Gallipoli), who intended to return the relic to Catania, the place where Agatha was born. With the arrival of the relic to the city, Saint Agatha replaced Saint John Chrysostom as saint patron of the cathedral at Gallipoli. In 1380, the relic was transferred to Galatina, leaving the Cathedral of Saint Agatha without its relic. The frieze of the new cathedral made explicit to anyone visiting the church the connection between the city and its saint.

Particularly interesting are the scenes depicted on the low reliefs of the frieze as they clearly introduce the political history of Spanish Gallipoli in the cathedral. There are at least three panels that recall attacksfrom enemies that occurred when the city was under the rulership of the Aragonese and Spanish monarchies: the capture of the city by the Venetian navy,ich enemies of the the landing in 1523 of the Knights of Rhodes escaping from the Ottoman invasion of 1522and the stopover of the galley of Don John of Austria on its way to Lepanto in 1571 (Fig. 4). While to the knowledge of this author there are no documents that indicate how the events represented were chosen, the role of Gallipoli as a Christian stronghold is flaunted in the panels.

The decoration of the frieze at the crossing is one level higher than those of the nave and transept and in it, the intention of the actors involved in the cathedral’s construction to leave a testimony to this is evident. The coats of arms of Bishop de Rueda, Lazzari, and other distinguished patrons of the new building are carved next to those representing Philip IV and the University of Gallipoli. The coat of arms of Giovanni Andrea Coppola, the artist commissioned to decorate several of the side altars, is also carved on the frieze (Fig. 5). These coats of arms and emblems, which can be seen from the central nave, place the contribution of those enabling the construction of the cathedral prominently within the building.

The Cathedral at Gallipoli crowned a period in the history of the city, represented in the rich symbolic program on the Doric order chosen for the interior. Considering the Greek origin of Gallipoli, the order’s choice was an understated reference to the city’s ancestors and its Classical past. In the decoration the, local cults and traditions precede the arrival of the relic of Saint Agatha, the city’ protectress. The metopes on the arms of the transept depict events that threatened the city’s peace, while the scenes on the crossing illustrate the arrival of the Spanish monarchy and, with it, the restoration of political harmony to the region. As the most important building in the city and a monument to its history, important families and artists championed the construction of the cathedral. Being part of their domain, the Spanish authorities saw the commission of the cathedral at Gallipoli as a statement of their presence in the territory and a reaffirmation of their role as defenders of the Christian faith and protectors of its people. Together, local pride and foreign power were the forces behind the construction of the Cathedral of Saint Agatha. This building stands today as a testimony to the intricate dynamics and different interests at work in the territories of the Spanish Crown in the early modern Italian Peninsula.