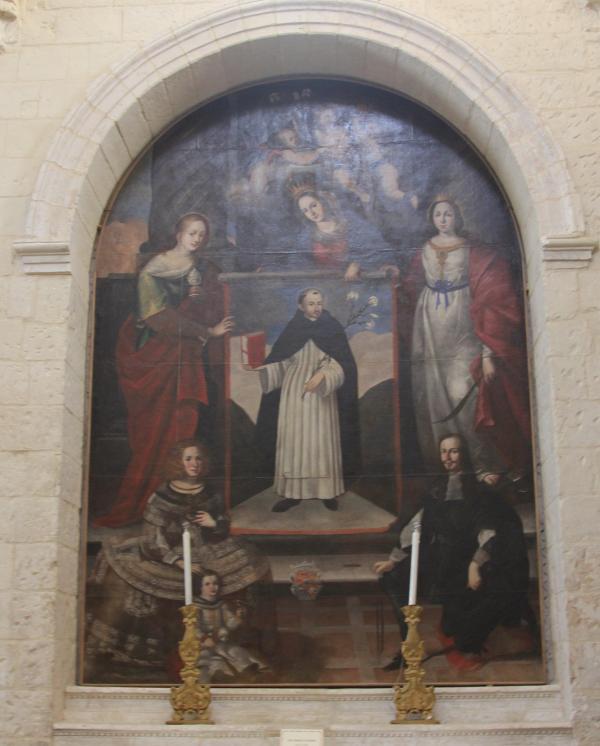 Throughout the seventeenth century, visual representations of the Soriano miracle were produced mainly in two formats: one that focused on the icon and another that reproduced the mise-en-scène of the event. Copies of this representation were initially produced at an on-site workshop by local artists, whence they were disseminated all around Southern Italy. Devotion to the miracle of Saint Dominic in Soriano began to spread across the Spanish Empire from Spain after 1624, mainly through paintings of the miracle by friar Juan Bautista Maíno (Guadalajara, 1581–Madrid, 1649), Vicente Carducho (1576-1638), and Juan del Castillo (1590–1657).

Traditional representations of the event depict the Virgin presenting a canvas with the portrait of Saint Dominic. Saint Catherine of Siena usually carries it and is occasionally helped by Mary Magdalen, who is often shown in three-quarter profile to one side. The Virgin consistently wears her red dress and blue mantle, and is frequently surrounded by cherubs, while Saint Catherine is commonly represented with a crown. The scene takes place in what appears to be a church interior (Fig. 2), or outdoors.

The Cavallino composition stands out from the other extant versions in that friar Lorenzo is not included. Instead, the marquise of Cavallino, Beatrice Acquaviva d’Aragona dei conti di Conversano e di Nardò (1609–1637), her firstborn son, Domenico Ascanio (1629–1697), and the marquis Francesco Castromediano (1598–1663) are shown receiving the sacred canvas in the lower part of the composition. The Cavallino painting shows a tiled floor on the foreground, and Solomonic columns and a blue sky with clouds in the background, which suggest that the scene takes place in a semi-open space. These motifs might hint at Beatrice Acquaviva's role as benefactor for the new Dominican convent in Cavallino (commissioned shortly after 1627).

Although the painting represents the mise-en-scène of the miracle of Soriano, the depiction of Saint Dominic is very close to the one in the Vero Ritrato di S. Domenico in Soriano by Francesco Caivano (1648), now at the Museo Diocesano Antonio Marena in Bitonto. The painting is not signed, but it probably dates from around the mid-seventeenth century, when, according to Mario Cazzato, the painter Antonello della Fiore was working for the family (Cazzato, 2016, 90, 91; Monaco, 2018, 239).

In 1627, Francesco Castromediano of Cavallino married Beatrice Acquaviva d’Aragona, and the following year, King Philip IV of Spain elevated the Castromediano family from a barony to a marquisate. From this moment on, Beatrice d’Acquaviva promoted an energetic development of Cavallino culture and architecture (Fig. 3). She was the daughter of Don Giovanni Acquaviva d’Aragona and member of the Southern Italian Acquaviva family, which as Francesca Canella observes, was considered an important agent for the spread of humanism in the region.

The Castromediano's relationship with the Spanish crown went back about two centuries, when Luigi Castromediano served Federico d'Aragona in 1484, yet one must ask if the arrival of Beatrice d'Acquaviva to Cavallino increased the extent to which the family displayed their support for the Spanish king. After her arrival, the Castromediano’s family allegiance was affirmed in different artworks, such as in the cenotaph of the marquesses (Fig. 4), and in altar paintings, like the one in the church of Saint Dominic and Saint Nicholas, where Francesco and Beatrice are dressed in the Spanish fashion (Fig. 5).

By promoting the image and cult of Saint Dominic in Soriano, the Castromediano supported the Counter-Reformation spirit of the Dominican order in Southern Italy. Could this endorsement be related to Frangipane's project to restore the reputation of the order from the damage caused by Tommaso Campanella's inquisitorial condemnation when attempting to establish an Ideal Republic in Calabria?

We know that Saint Dominic of Soriano became a leading figure of the Counter-Reformation in Southern Italy during the seventeenth century before its dissemination to the whole of the Spanish kingdom.

The devotion of Saint Dominic in Soriano also spread to the Americas. Two images allow us to appreciate this transatlantic movement: a painting in the Dominican convent in Cuzco (Fig.6) and a canvas, dated from 1640–1680, in Casa de Juan Vargas in Tunja, Colombia (Fig. 7). Although there are notable differences between these paintings and the one from Cavallino—such as the representation of the scene in a semi-open space, the inclusion of the patrons, and the depiction of a trio of cherubs flying above Virgin Mary—one remarkable coincidence is that in the Peruvian, as well as in the Cavallino painting, the Virgin is the one holding the canvas. Following Luisa Elena Alcalá's inquiry into religious images, one should further inquire into the local representations of the Soriano miracle throughout the Spanish Empire.