The cortile rinascimentale of the Castello Svevo of Bari 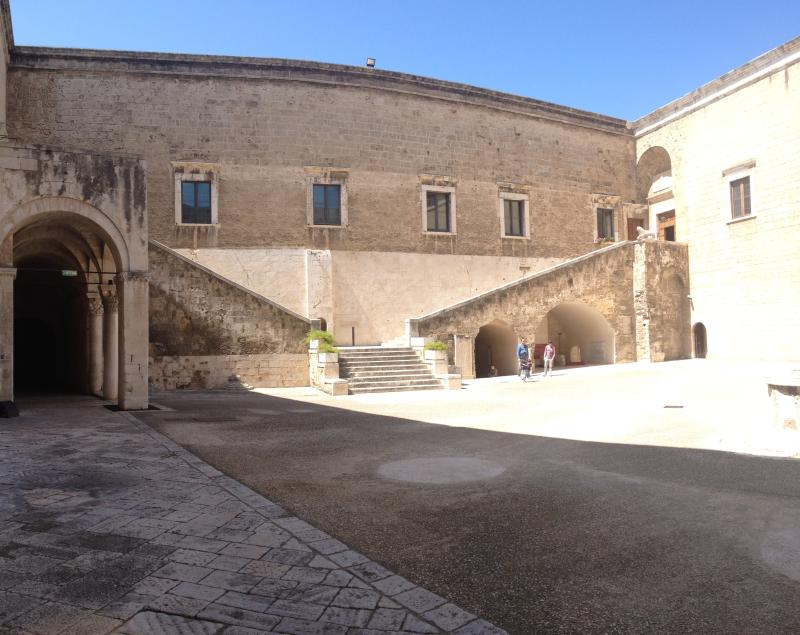 Renaissance courtyard of the Castello Svevo of Bari. Image in the public domain.

The cortile rinascimentale of the Castle of Bari is an open courtyard composed of different architectural elements representative of the historical and political connections that characterize the Apulian Renaissance. The cortile is located inside the old castle built by the Norman king Roger II in 1139 to control urban unrest. Under the reign of the Swabian Emperor Frederick II, the castle became one of southern Italy's largest fortresses of the Swabian defense system. Since then,has been known as the “Castello svevo”.

Maintenance work had been done over time, from the Angevins to the Orsini family, but the most important architectural interventions were made by the Duchess Isabella Sforza, who ordered the construction of strong scarp walls with a large moat all around the Swabian castle. More renovations were promoted by her daughter Bona, who converted the Swabian core of the castle into a Renaissance residence. The cortile rinascimentale is one of the areas of the castle most representative of these changes.

The oldest part of the cortile is the portico built at the time of Frederick II to connect the entrance hall to the atrium. It has a rectangular plan with two arches resting on a central column on the longest side and one arch resting on two pillars on the shorter side. The most admirable part of the portico consists of two capitals finely decorated with acanthus leaves mixed with vegetal , fruits, and eagles. The eagles are represented with spread wings and prey in their claws and symbolizeSwabian imperial power over terrestrial creatures. Two inscriptions engraved on the pulvini of the columns reveal the names of the authors of these capitals: Mellio da Stigliano and Minervo da Canosa. Their work the Islamic imprint of the Sicilian court of King Frederick II, where Norman architecture was enriched with elements derived from Islamic iconography such as vegetal , fruits, animals. Therefore, these capitals represent the connection with the Islamic style, which, through the Normans, arrived in Puglia in the thirteenth century and mixed with the typical forms of the Apulian Renaissance.

Close to the portico, there is a monumental staircase built during the renovation works ordered by Bona Sforza in 1548 (Fig. 1). The staircase has a few central steps leading to a small floor from which two ramps branch out, one to the left and one to the right. In front of the double-ramp staircase, on the south facade of the cortile, Bona commissioned the opening of a chapel dedicated to St. Stanislaw of Kraków, protector of Poland.

Daughter of the Duchess Isabella Sforza, Bona up between Milan and Bari, surrounded by the best scholars, academics and personalities of the Italian Renaissance such as the humanist Galateo, the poet Pietro Gravina, and the patron Alfonso d’Este. Thanks to her mother’s international connections, Bona married the Polish King Sigismondo I in 1518, thus becoming queen of one of the largest territorial powers in Eastern Europe. She spent thirty years of his life there, becoming the pivot of a Renaissance court with an Italian imprint.

After the death of her husband in 1548, Bona decided to come back to Bari to live there with her Polish court. why she commissioned the captain Artusio Papacoda to convert the castle into a princely residence. The first floor's hall was enlarged, the monumental courtyard staircase built, and the chapel opened to honor the Crown of Poland.

Today,the cortile rinascimentale presents suggestions from Arab Norman Sicily to Italian-Polish Renaissance, thus becoming a symbol of the connections that affected the political and artistic history of the Apulian city of Bari.