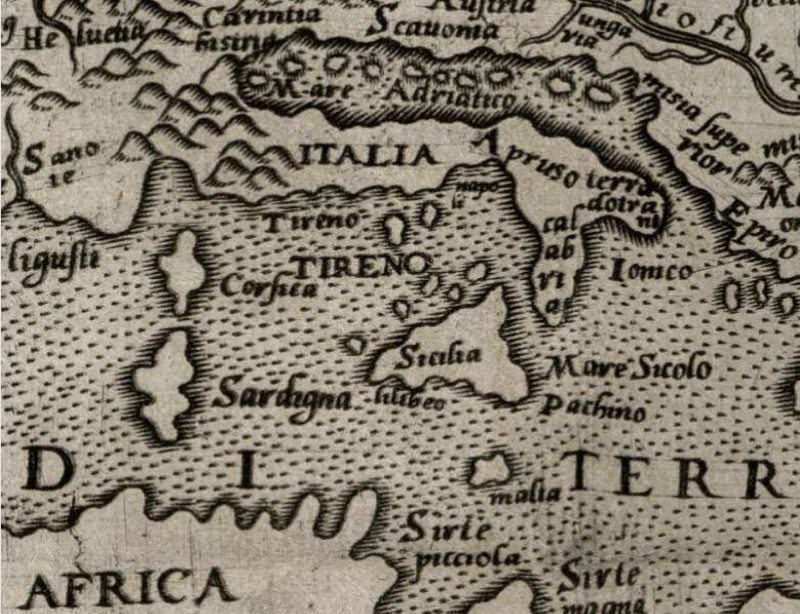 It’s an Italy without Rome, Venice, or Florence (fig. 1)—an “Italia” whose unique readable city is Napoli, nestled in a gulf embraced by the toponyms of Apruso (Abbruzzo), Terra d’Otranto (Puglia), Calabria, and by the islands of Sicilia and Sardegna. On the west tip of Sicily, one reads Lilibeo (“pointing toward Africa,” according to Pliny the Elder), the ancient Phoenician-Punic city whose port was blocked by Charles V to protect it from the Ottoman incursions. On the southern tip, Pachino, from whose functioning port of Palo in Capo Passero one could rapidly reach the island of Malta, represented in the map as standing in the middle of the Mediterranean.

This vision of the Italian peninsula, with its recognizable focus on the lands and seas of the Spanish kingdoms, is a detail of Europe (fig. 2), the first of the four folding maps that accompanied a cosmographic treatise written by the Calabrese Lorenzo Anania (1545–1609, also called Giovanni Lorenzo o Gian Lorenzo d’Anania) and published in Naples in 1573: La Universal Fabrica del Mondo (“The universal smithy of the world”). The title page (fig. 3) and the dedicatory further situate the book in a web of Spanish-Italian regions. The author is introduced as “della citta di Taverna” (today in the province of Catanzaro, Calabria), the printer, Giuseppe Cacchi, as “dell’Aquila” (today Abruzzo), and the dedicatee, Don Ferrante Carafa, brother of the archbishop of Naples Mario Carafa, as count “of Soriano” (Calabria). The name of the Vicario Generale of Naples, Pietro Dusina (future inquisitor of Malta), gives the imprimatur on the last page (“Impr. Petrus Dusina Vic. Gen. Neap.”).

Soon after its Neapolitan first edition, La Universal Fabrica del Mondo became a bestseller. It was reprinted in Venice 1576, apparently with no maps, by the Neapolitan editor Aniello di Sanvito. The second edition of 1582, also published in Venice, assured an even broader impact to Anania’s treatise, which lost some of its local anchorage to participate in a more international vision: it comprised new Ortelius-inspired maps engraved by Gerolamo Porro and was reprinted in 1596 (see its cover here). The book was collected throughout Europe, from the Convent of the Carmelitas Descalzas of Madrid to the library of Melchisédech Thévenot in Paris, to that of Odorico Pillone of Casteldardo in Val Caldore near Belluno where the vellum binding was beautifully decorated by Cesare Vecellio, Titian’s cousin and pupil. Torquato Tasso read and thoroughly commented Anania’s reatise, in particular its fourth part, devoted to the New World.

But it’s the 1573 Neapolitan edition of La Universal Fabrica del Mondo that offers a formidable port of entry to consider valuable questions for Spanish Italy and the Iberian Americas: How does a Calabrese author think of the “mondo” —a world that is mostly governed by the Spanish crown? How is cosmography written from the perspective of a viceroyalty? How does America look from Spanish Italy? A map of the New World, entitled “Peru” in the princeps (fig. 4) was included in the treatise. Were there preferential channels for circulation of artifacts, ideas, people, between the Spanish territories —channels that did not necessarily pass through what one considers today the “centers” or Italian Renaissance or Baroque?

I first became interested in this book more than two decades ago, for a great passage that Anania devotes to feather images arriving from Michoacán, New Spain. He describes in detail their astonishing optical effects and adds “di qua hor si porta gran copia,” “they are now brought here in great quantity” (f. 7v). The expression di qua, “here,” in a cosmographic treatise, may refer to the part of the world from which the author was writing, Europe, but one can hypothesize that feather artifacts were also circulating in the Kingdom of Naples—in the viceroy’s palace and in the residences of the most varied functionaries of the kingdom. More recently, I found another intriguing excerpt of La Universal Fabrica, where Anania describes the technical durability of the medium used in a Mexican pictographic book subtly painted on animal skin (f. 8). Here, Anania writes that a mathematician, a certain Friar Alonso Ferrea “of the regular order,” showed him the painted book. We do not know yet who this Ferrea was, but one can imagine that this friar lived in or visited Naples, or another city of the kingdom. Was Ferrea a Dominican friar who traveled to the famous convent of Soriano Calabro, the county of Anania’s dedicatee? Did Ferrea leave a Mexican codex to Ferrante Carafa or to his brother the archbishop? If this pictographic manuscript intrigued a “mathematician,” was it because it included a pre-Hispanic calendar counting that fascinated intellectual circles on both sides of the Atlantic? All these working questions, hypothetical and even fantastic as they look, help us to approach another history and art history of the early modern times from Spanish Italy and the Iberian Americas.

Along with these precise references to American artifacts, Anania’s treatise also allows to glimpse the mirror effects that came into play between two discrete zones under the Spanish crown. Let us have a close look at a commentary the author wrote, en passant, in the fourth part of La universal fabrica. After presenting Mexico as an accomplished city of the viceroyalty with all its institutions (“la cancelleria, col viceré, l’archivescovo, lo Studio, la Stampa e la Zecca battendosi moneta d’agento […] con l’insegna del Plus Ultra, vi sono tutte l’arti, cosí come in Spagna”, f. 7), Anania describes Tlaxcala as a “republic”. This city had allied in 1519 with the Spaniards against the Mexica and played a crucial role in their victory. The Spanish crown, in exchange, had granted Tlaxcala special privileges within the kingdom of New Spain. Lorenzo Anania is well aware of this concession and salutes it, stating: “poichè conservar repubbliche è officio d’Imperadore”. “Keeping the republics is the task of the emperor”. May this be a political commentary on how the Spaniards should govern Spanish Italy too —conservando repubbliche?  The dedication to count Ferrante Carafa, who entertained a stormy relationship with the crown may be understood with this important Tlaxcalan key. Former gentilhombre de boca of Charles V, but eventually active protester against the viceregal politics in Naples, Carafa seems to have tried to bypass the Spanish local viceregal powers appealing directly to the royal court, as when he wrote Dell’Austria, an epic poem on Lepanto dedicated to Philip II and printed by the same Cacchi in Naples, in 1573. Was he also hoping for a special, Tlaxcala-like privilege for the Neapolitan region?

L’Universal Fabrica del Mondo, in its 1573 princeps edition published from Naples, becomes therefore a gateway, or rather a threshold from where to start piercing the relationships between Spanish Italy and the Iberian Americas: the physical circulations of people, artifacts, and ideas, but also the mirror effects and the imaginary and symbolic associations that traversed these distant yet close spaces of the Iberian atlas. All the components of the printed book—cover, front matter, the map, and other visual elements like the printer’s device (the book’s paratexts, theorized by Gérard Génette, precisely, as “thresholds”)—are, along with the main text, liminal mediations from which to try to reconstruct the dynamic connections between Spanish Italy and the Iberian Americas—two parts of “questa macchina mondiale”, as Anania calls the world in 1573.

Thanks are due to Bianca de Divitiis, Lia Markey, Michael Cole, and Daniel Dolin for their feedback to earlier versions of this essay.