This is [Not] a Crown: Annunciazione with Donors, attributed to Giandomenico Catalano (ca. 1630) 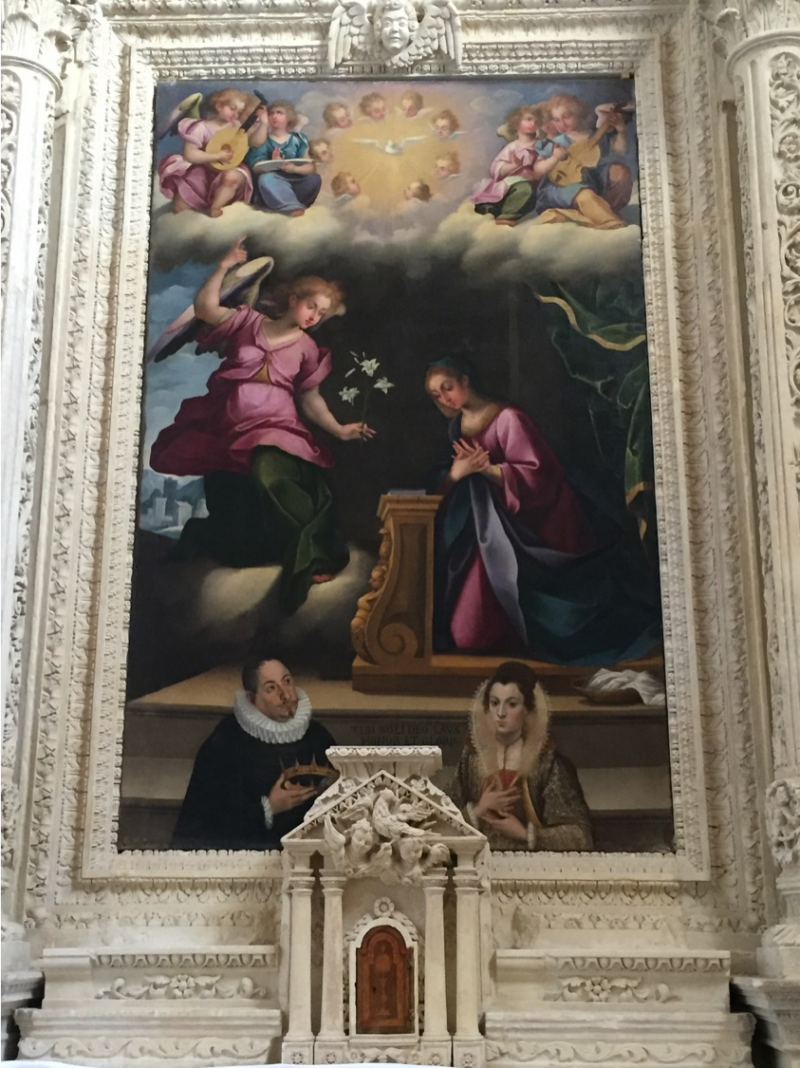 Entering the Chiesa Madre of Specchia (Salento, Puglia), one is immediately captured by a painting of exceptional finesse. Still framed by a coeval altar in pietra leccese, the monumental canvas depicts the Annunciation surrounded by a mix of sacred and real scenes; on the top, at the center, the foreshortened flight of the Holy Spirit is surrounded by a rose of cherubim’s faces, while on the side, angel musicians sit on a thick layer of dense clouds which seem difficult to pierce even by the messenger’s assured finger. On the left, a grisaille-like view of a town and hills recalls Specchia. The Annunciation moment itself is organized around a prie-dieu supported by a sensual caryatid that recalls the astonishing woodwork still visible in the region (pulpit in Manduria, Chiesa Madre). The indisputable portraits of a man and a woman—a couple shown in all their decorum (the man’s black dress, the woman’s prudent elegance) with no point of physical contact between them and kept even more at a distance by the length of the inscription Tibi Soli Deus Laus Honor et Gloria— offer a bridge between the pictorial space and our space: the man seems to look up while the woman’s eyes intriguingly fix on us. Her light strabismus captures our attention still more. The pictorial rendering of her skin makes her auratically present.

The painting is today assigned to Gian Domenico Catalano (1560-1635?). Biographical notes on this artist are scarce. Born around 1560, married to Persia Lombarda, and father of a Giovan Pietro baptized in 1599, the painter was probably trained in Naples and familiar with the “international mannerism” of Teodoro d’Errico or Francesco Curia. Active in Salento, Catalano was celebrated in 1634 as eccellente pittore by Giulio Cesare Infantino. Lucio Galante assigns to Catalano forty-eight paintings and another dozen to his workshop. A possible common denominator of this extremely heterogenous corpus seems to be the effort to anchor the representation of sacred episodes in the territory and in the society of the region. In Saint Diego de Alcalá (Chiesa di S. Francesco, Gallipoli), Catalano portrayed the castellano, the Spaniard Consalvo de Carmona, with his wife and son; in Bishop Capece imploring S. Carlo Borromeo to protect Gallipoli (Chiesa del Rosario, Gallipoli), Catalano included a view of the city-island with its ancient and new bridges; in Saint Domenic with a view of Gallipoli (Alezio), Catalano attested to the fact that the ancient bridge had been demolished in the interim. These pictorial details are sometimes easy to decipher. The two portraits in the Annunciazione seem less easy to understand. Who are these donors and is there any “realistic” detail that helps to raise new questions?

Let us zoom out for a moment. The medieval town of Specchia had been destroyed in the fifteenth century during the so-called “Guerra di Puglia,” when it remained a faithful ally of the Aragons against the Angevins over the control of the territory. In 1452, the local nobility obtained permission from Alfonso I of Aragon to repopulate Specchia as a fortress against the Ottomans. After the Ottoman siege of Otranto (1480-1481), the local lords may have been given particular power in this “frontier zone.” One of these lords was Prince Desiderio Protonobilissimo, who inherited Specchia in 1620 or 1630 when he married Margherita Trane, the daughter of Ottavio Trane, according to Tasselli. The couple transformed the fifteenth century “castle” into a “palazzo marchesale” (today Palazzo Protonobilissimo-Risolo). The pair of statues at the entrance could represent bride and groom, with a coat of arms surrounded by the heraldic crown of marquess, recognizable with fleurons and pearls.

A crown is also held by the man of the painting, which is extremely rare in portraiture. Some authors take him to be Desiderio holding his heraldic crown, in the company of Margherita. But this cannot be his heraldic crown: it’s neither the crown of a marquess, nor is it represented inside or on the top of a coat of arms. It is rather a crown “in the flesh”—portrayed in all its roundness and shininess— and corresponds to what specialists call an “ancient or Oriental crown”, or a “radiant or solar crown”. This particular crown appears frequently on the head of the Magi to suggest their Oriental provenance (Benozzo Gozzoli disguises beneath John VIII Palaeologus), but was also specifically used to refer to the Roman Empire of the East and to Byzantium-Constantinople, as in the representation of Constantine in The Vision of the Cross of the Stanze Vaticane.

What unexpected story is unveiled through the detail of the “ancient crown” in the painting of the Annunciazione? Would a transhistorical imaginary of ancient belonging have played into the portrait of the donor? Before becoming Spanish, a large part of Puglia had been Byzantine. Still today, part of Salento is known as Grecia Salentina, griko is spoken, and Byzantine art is visible near Specchia. In Ugento, the Cripta del Crocefisso presents astonishing paintings, including the Annunciation. The Byzantine crypt in Casarano, repainted in 1603, is dedicated to the Virgin of Constantinople. Greek graffiti are omnipresent on Medieval and Renaissance churches of the region. Pride in a Greek origin was a central theme of Antonio de Ferrariis known as Galateo (1444-1517, born in Galatone, Salento), one of the most respected Italian humanists of Quattrocento and the physician of the King of Naples Ferdinando I (1423-1494). Galateo published works such De Situ Iapigiae, where he affirmed Graeci sumus et hoc nobis gloriae accredit. Would the donor portrayed in the painting be thinking “I am Greek and this confers me Glory” along with what the inscription, a quotation from the Vulgata, says (“Only to you, God, Praise, Honor, and Glory”)? Could that imaginary Byzantine origin confer him the position to praise God more authoritatively?

Interestingly, Ferdinando I himself seems to have been particularly fond of being portrayed with an “ancient crown” [See this coin minted in Aquila, Spanish Italy, or this manuscript]. The King of Naples had a particular relationship with Puglia, as in 1458 he was crowned in Barletta (Terra di Bari). Would a specific transhistorical imaginary of a Byzantine connection have more specifically played a role in the way Spanish kings envisioned the genealogies of power in their Southern Italian territories —especially after the Fall of Constantinople in 1453— and in how the alliance with local nobility (which identified itself as, at least in part, Greek) was strengthened? The Byzantine (re)connection makes more sense when we recall that the region was a frontier: did the fight against the Ottomans from Spanish Puglia boost the imaginary of this ancient geopolitical atlas and the lure of constituting a common front ? These questions on a region of Spanish Italy may complicate further if we look at other representations of territorial conquest and translatio imperii in the Iberian Americas, where local lords also wear crowns all’antica or even sport Inca mascapaicha, in Christian paintings.

Finally, to return from the detail to the art of painting: does this crown tells us also something about the theory of painting tout court? Neither heraldic nor just realistic, the crown of the donor in the Annunciazione seems rather a trompe l’oeil that powerfully holds together real, imaginary, and symbolic. As a trompe l’oeil, it is also a statement on painting and of its incessant labor to destabilize what it seems to be and to make us look again.

For their insights in the preparation of this essay, thanks are due to: Patrice and Leonardo Ottavio Giasson for our visits to Specchia, Ugento, Manduria, and throughout Salento, in July, 2017; Alberto Montaner and Jesús R. Velasco for questions related to heraldry; Pier Mattia Tommasino for the reference to Antonio de Ferrariis (Galateo); Paola Goretti for the precisions about the donors’ dress; and the participants to the project for their comments—in particular Lucía Querejazu for calling my attention to Inca mascapaicha in Christian painting.