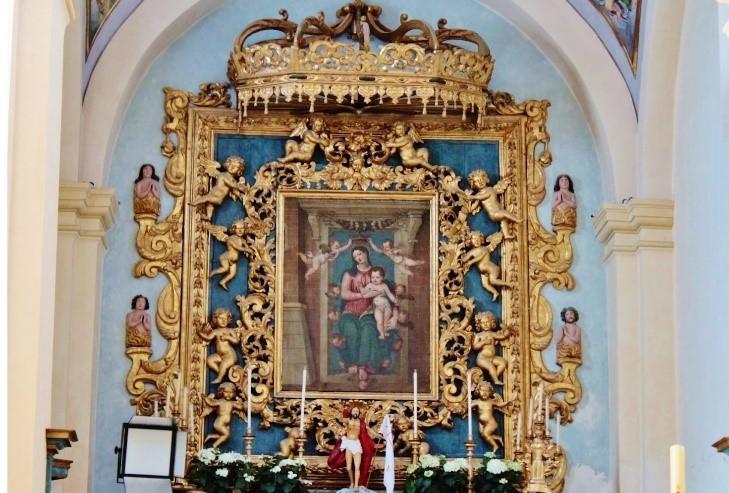 The sanctuary of the Virgin of Loreto in the Marche region was one of the dominant pilgrimage centers of Europe during the early modern period, along with Saint Peter’s in Rome and Santiago de Compostela in Galicia. Cult following developed throughout the region during the fourteenth and fifteenth centuries, but once placed under papal tutelage, starting in the 1470s, it spread to other parts of Italy and many areas of Europe and America as well. The cult revolved around two objects: a sculpture of the Virgin and Christ Child believed to have been made by Saint Luke, and the Holy House of Nazareth, which according to legend was transported by angels from Holy Land to Italy in 1291-94. Captivated by the idea that a visit to Loreto meant actually inhabiting the house where the Annunciation took place and the Holy Family lived, many pilgrims returned to their hometowns to build a replica of the Holy House and/or establish a chapel. This painting is an example of how the cult spread to Puglia, where there are a number of other chapels and churches harboring Loretan images.

In this painting the Virgin sits on a bench, holding the Christ Child upright on her side. Mother and son look at the viewer, who receives the blessing from Jesus. Surrounded by a classical architectural frame that appears to be a door, they seem to be presented to the viewer on the “threshold” of their home, in a way that, despite the obvious compositional and stylistic differences, looks forward to Caravaggio’s famous 1604 painting of this theme (Church of Saint Augustine, Rome). The idea of the Virgin of Loreto being depicted before a door in order to greet followers coincides with the trend in this part of Italy to build Loretan chapels on or near roads used by pilgrims. The devotion in Puglia also seems to have been geared to attending to the local immigrant populations from the other side of the Adriatic.

Many print sources could have inspired this composition, although it is likely a combination of several. Some late fifteenth- and sixteenth-century woodcuts and engravings show the Virgin and Child seated in this way and include two angels crowning the Madonna. However, in all of those prints, she is always depicted perched on the rooftop of the Holy House and not in a doorway. Alternatively, there are also prints of her standing under a baldachin or architectural frame, but in these she is holding the Christ Child, and typically there is no crowning taking place.

The most interesting part of the painting, and one that does not correspond to the many known prints of the cult, is the depiction of a building made of bricks on either side of the door, a feature (an attribute of sorts) which identifies this Madonna with Loreto through the association with the materiality of the Holy House, which was indeed made of bricks. This detail raises questions, such as whether the painting has been cut down from a larger composition that included more of the architecture. Further to the left, however, there appears to be a kind of buttress, a structural element that does not correspond in any way with the Holy House. Nonetheless, it is evocative of the fortifications that envelop the sanctuary of Loreto. In other words, it may have been incorporated into the painting because of the cult’s identification with a protective role against the recurrent incursions of the Ottoman Turks on the Adriatic coast.

Although there are still unanswered questions about this painting, it is an example of the phenomenon of the multiplication of copies of a Marian cult image and their transformations. Far from being a simple and unoriginal “copy” of a print, it is probably an example of how cults are localized and made meaningful through artistic representation to the inhabitants they serve. A working hypothesis about this painting is that it may relate to the role that a specific sense of geography often played with regards to the expansion of the Madonna of Loreto worldwide. Associated with travel, protecting roads, connecting places, and sacralizing frontier territories, the way the image of the Virgin and Child occupies space in this painting, pivoting between the inside and the outside of her House, speaks eloquently to particular features of life and religion in Puglia.