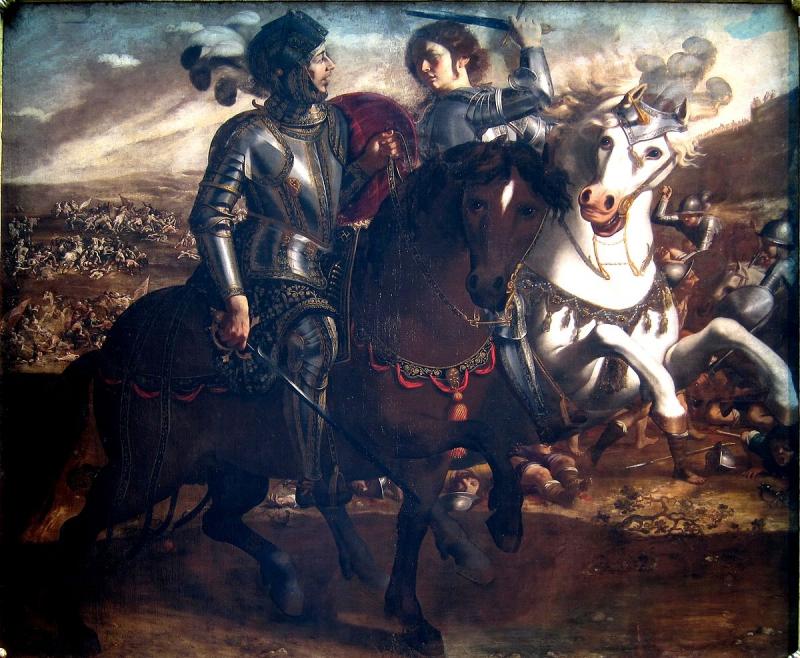 The Neapolitan painter Paolo Finoglio (1590-1645) here depicts two figures from the third canto of Torquato Tasso’s epic poem on the First Crusade, La Gerusalemme liberata (1581): the Norman crusader, Tancred, and Clorinda, the Saracen warrior whom the knight has earlier encountered, by chance, resting by a riverside, only to become deeply enamored of her “beautiful, warlike image” (l’imagine sua bella e guerriera). When the crusaders later arrive at the gates of Jerusalem, the two riders again meet on the battlefield: striking with their lances at the visors of one another’s helmets (ferírsi a le visieri), shattering the wood of their weapons (e i tronchi in alto), the strap of Clorinda’s helmet is eventually severed (rotti i lacci a l’elmo suo) and falls to the ground, revealing her face to Tancred.

Finoglio depicts the succession of moments immediately following the revelation. Tancred, astonished, challenges Clorinda to a duel, a pretext for retiring from the battle to declare his love. As she raises her sword, he stops her: Or ferma,—disse—e siano fatti, anzi la pugna de la pugna i patti (“Stop—he said—and before we fight, let’s hear the terms”).

This monumental easel painting, roughly two by three meters, was produced by Finoglio in the final decade of his life, as part of a series of ten paintings representing epsiodes from the Gerusalemme liberata, commissioned by Giangirolamo II Acquaviva d’Aragona, count of Conversano, and countess Isabella Filomarino. In the seventeenth century, the paintings adorned the great hall of the eleventh-century Norman castle at the centre of the town, some twenty miles south of Bari, where the Aquaviva had ruled since 1456.

The Gerusalemme liberata cycle of Finoglio is one of the most complete and ambitious pictorial responses to the poem. It is also remarkable for its martial emphasis. Whereas Roman and Bolognese artists, assiduous interpreters of Tasso from the late sixteenth century, very rarely depicted the battle scenes described by the poet, Finoglio here closely attends to the depiction of arms.

The painter depicts Tancred in a full suit of elegant damascened parade-armour, in contemporary Spanish fashion, with a plumed helmet, and bases of black and gold brocade. As he turns in his saddle to gaze at Clorinda, his gold-handelled rapier hangs down at his right side, a mark of amorous surrender. This attention to the material beauty of arms is close to the spirit of the poetic text, in which an intensity of inward sentiment is often brought to expression by the energy and complexity of martial images. The two figures, depicted by Finoglio in the immediate foreground—almost, as Rossana Buono and Sebastian Schütze have both argued, in the manner of a theatrical performance—enact the poetic antitheses of sweetness (dolcezza) and rage (ira), courtship and combat, described by Tasso, in the visual contrasts between the suspended rapier and the upraised sword, the bay horse and the white. Since the poem was often adapted into the courtly entertainments involving either sung recitals  or dramatic equestrian tournaments, Buono has even suggested that the stimulus for the commission at Conversano may have been such a performance.

However, for the Acquaviva, feudal lords on the Adriatic coast, the representation of the Gerusalemme liberata must also have assumed the quality of mythic reenactment: the first Norman counts of Conversano were closely involved in the events of the First Crusade, while a later ancestor, Tancred of Hauteville, count of Brindisi, bore the name of Tasso’s hero. Ships had departed for the Holy Land from Bari, Brindisi, and other Apulian ports, and armies had passed through Conversano. More recent history on the coast, as well, must have given force and immediacy to the poem. Giovan Girolamo I Acquaviva d’Aragona, the great-grandfather of Giangirolamo II, had served as captain-general in the Catholic armies of Philip II against the Ottoman fleet at Lepanto, in 1571—a decisive victory for the Holy League in a war that had been framed by Pope Pius V as a new crusade. After the Venetians, two years later, concluded a peace treaty with the Ottomans, intermittent war between Spain and the Ottoman Empire would persist in the eastern Mediterranean for the next several decades. In the first decades of the seventeenth century, Spanish galleys on several occasions attacked Turkish ships off the coast of Anatolia, and the Ottomans retaliated with attacks on coastal towns in southern Italy. In 1619, at the age of nineteen, Giangirolamo himself fought in the defense of Manfredonia, an Apulian town that was eventually sacked by the Ottomans.

The interest of Finoglio in the close description of armour and in the gestures of war also reflects a broader interest in martial themes in the painting of Spanish Italy, and especially the kingdom of Naples, which may relate to these and other contemporary military realities across the Spanish Empire during the period of the Thirty Years War. The miniscule groups of soldiers locked in combat in the far background of the scene suggests a familiarity with the genre battle scenes produced by Aniello Falcone (another illustrator of Tasso) and his followers in Naples from the 1630s onward, as Christopher Marshall has noted. Finoglio, who led a succesful career in Naples in the 1620s, brought the leading currents of naturalistic painting to Conversano when he left his native city in 1635 to work as court painter to the Acquaviva. The encounter between the painter, who appears in notarial documents for the final decade of his life as Conversano commorans (resident of Conversano), and this ancient, feudal barony of the south, impressed more recently by the Spanish tradition of arms, produced a highly refined interpretation of a poet who was himself born in Spanish Sorrento.