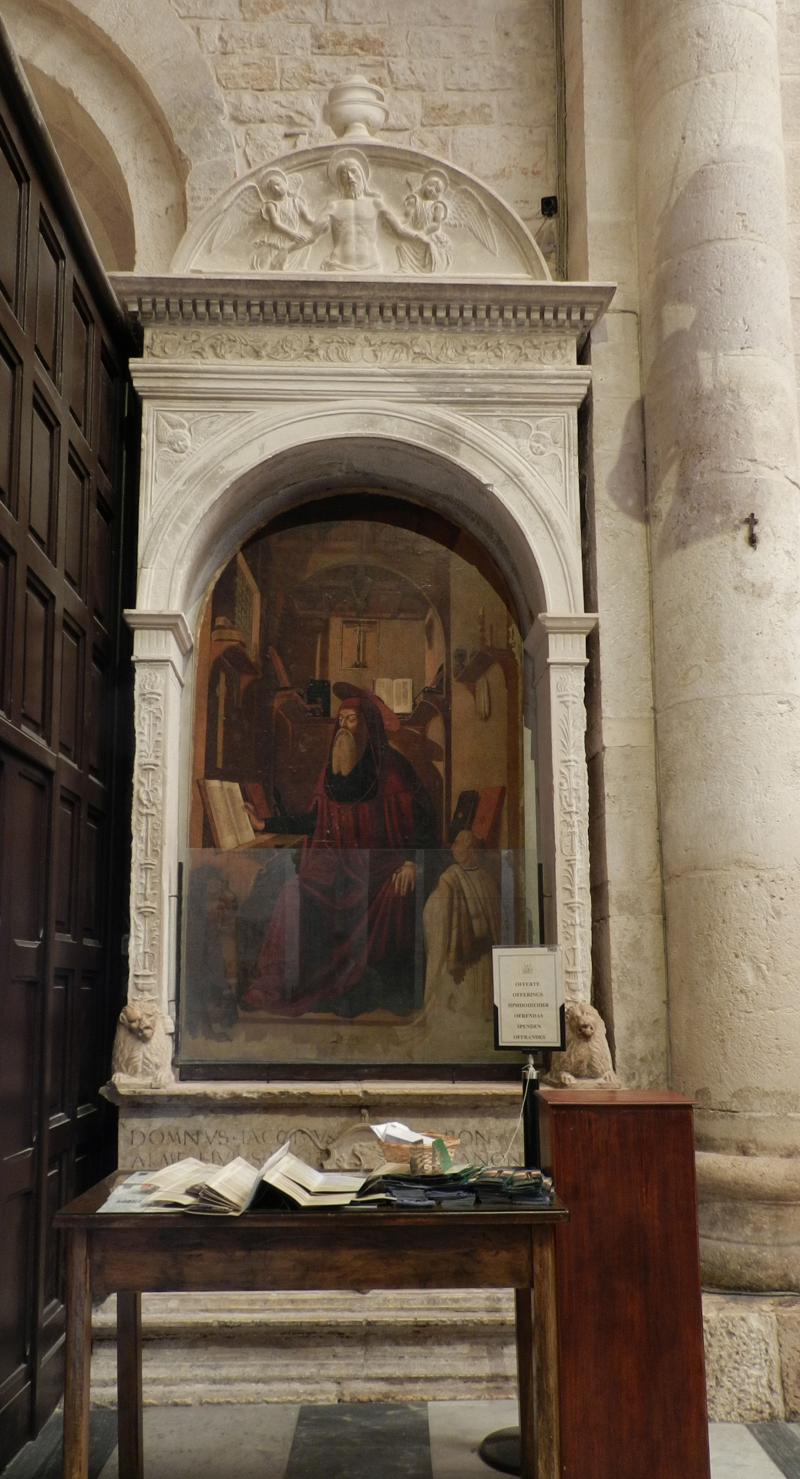 Funerary monument (sepulchre) of Giacomo Bongiovanni. Attributed to Paolo Catalano da Cassano, with a painting of St. Jerome in his Study attributed to Costantino of Monopoli. After 1510. Church of Saint Nicolas, Bari. Photograph © HistAntArtSI.

The tomb of Giacomo Bongiovanni is one of the few early sixteenth-century monuments preserved in the Basilica of Saint Nicholas in Bari. Most of the church walls are bare, owing to various conservation campaigns, most dramatically those between 1925 and 1934, when a desire to recover medieval “authenticity” stripped the church of centuries of history and art. Earlier sources reveal that in the sixteenth century, this church, like others in the city such as the cathedral, had side chapels, many with tombs of prominent local inhabitants. Sculptures and paintings ornamented them, a few of which are preserved in museums, for example the Virgin and Child with Saint Enrico of Upsala and Saint Anthony of Padua by Paris Bordone, originally in the cathedral chapel that belonged to the Tanzi family. Decontextualized and removed from their original architectural frame, such works are no longer entirely understandable, especially because they have lost the complementary artistic elements that collectively articulated funerary monuments. By contrast, the tomb of Bongiovanni offers a window onto the way in which the arts came together to commemorate the deceased at the height of the Renaissance in Puglia. Here, we have painting, sculpture, architecture, a coat of arms, and a commemorative epigraph in Latin.

According to the tomb’s inscription, Giacomo Bongiovanni, canon of the basilica, teacher to Bona Sforza (also buried in this church), and rector of the adjacent school, planned his tomb in life. The painting that dominates the monument is dedicated to St. Jerome in his study, patron saint of knowledge, and appropriately includes a portrait of Giacomo kneeling. Although in the late nineteenth century it was thought to be by Gentile Bellini, Pina Belli D’Elia has reattributed it to a local painter working in the Terra di Bari in the first two decades of the sixteenth century, Costantino da Monopoli. Costantino would have been reinterpreting a model by a follower of Bellini, Lazzaro Bastiani (ca. 1429-1512), which was originally in the cathedral of the town of Monopoli, a painting of the same theme, also with a kneeling donor, a local doctor who had commissioned it from Venice. Venetian works were indeed highly coveted by Pugliese society, and not just by the nobility.  It is also worth noting that the architectural and sculptural elements of the tomb have been attributed to Paolo Catalano da Cassano, about whom very little was known some years ago but who is now emerging as a key figure in the region. Active in Puglia between 1504 and 1545, here he shows himself a skilled carver capable of creating a moving image of the Christ of Sorrows in the crowning lunette. The tomb is therefore to be understood more clearly as the work of a series of local artists, even though parts were thought to be Venetian originally. In this respect, the tomb reflects the complex history of circulation, taste, and patronage that characterized the relationship between the arts of a Spanish region like Puglia, and those from other parts of the Italian Peninsula, like Venice.

In the context of this research project, the changes that the monument’s study has undergone in terms of authorship is worthy of commentary, because, as just noted, it is symptomatic of the larger transformations taking place in the historiography of art in Puglia. Thinking of the St. Jerome painting as a work made by a prominent Venetian artist (Bellini) constructs a master narrative for the history of painting in Puglia that privileges the imports from dominant artistic centers, and consequently relegates the local names to obscurity. Uncovering instead the possibility that a local hand was at work transforms that narrative and introduces a richer history of connections between the local and the foreign.

These historiographical transformations have parallels with the history of painting in the viceroyalties in Spanish America. There, too, for a time it was common to conclude that if a work showed a certain quality or style closely reminiscent of the Iberian Peninsula, it had to be by an artist from Spain who had either travelled to America or sent his works across the Atlantic. And, as with the paradigm of the Bellini brothers,  the artists to whom paintings were assigned tended to be art history’s best known. More recently, the names of secondary Spanish artists are emerging, figures who reacted—as perhaps Lazzaro Bastiani in Venice—to emerging distant markets by imitating the style, themes, and compositions of the leading masters. The case of Francisco de Zurbarán in Seville and what has been called widespread zurbaranismo in viceregal America is the clearest example of this. Although Zurbarán sent many works for sale across the Atlantic, imitators of his style sent more (J. M. Serrera, 1988 and D. Kinkead, 1984). And, as in Puglia, the local dialogues that emerged with those imported works in the viceroyalties are now being more carefully studied. To this end, documentation has been and will continue to be an instrumental catalyst for questioning the earlier trends in attribution and provenance. Just as in Puglia (with someone like the elusive Costantino), in Cusco, or even Mexico City, documents reveal the names of far more artists than works known or attributed to them. This in itself is an invitation to look again and write a more inclusive history.

The reconfiguration that the tomb in Bari has undergone is a good reflection of the process that Clara Gelao traces in the introduction to her monograph Puglia rinascimentale. She recalls how in 1965 Michele D’Elia wrote about an “episodic Renaissance” occurring in Puglia and how at that time, no one would have thought it possible to think about Renaissance art in this peripheral part of the Italian peninsula in any worthwhile way. Fortunately, scholars such as Gelao, and more recently Bianca De Divitiis and her research group, are demonstrating that the Renaissance was more than episodic here. More importantly, they are shedding light on the processes that made it possible, including, as we see through this example, the itinerancy not only of foreign art (and sometimes artists) but also local or regional ones who moved between the various cities of Puglia, a geography at the crossroads, which often offered prestige-building patronage opportunities, as well as a dynamic stage for artistic production in dialogue with developments in many places, and most definitely not isolated.