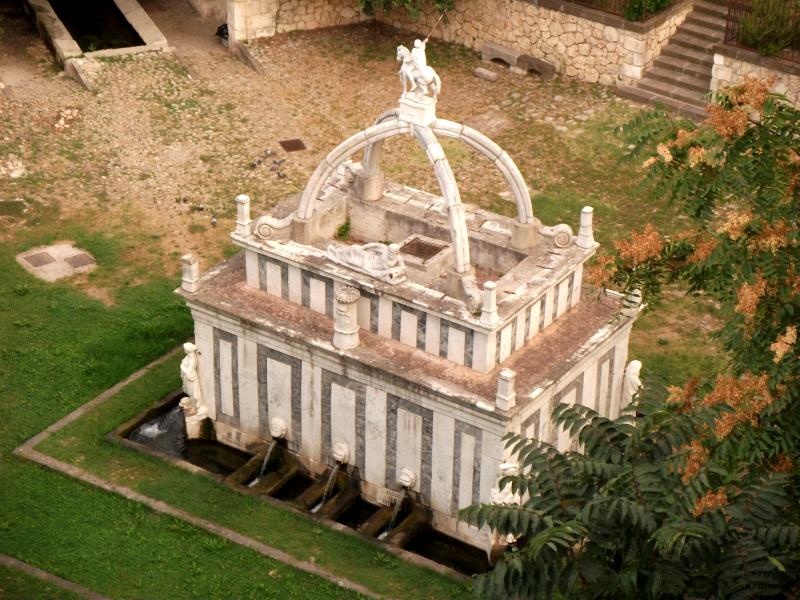 Water—more precisely, fresh water—is a central element for the entire Mediterranean region. In ancient and early modern times, water was not only viewed in relationship to its use for drinking and other purposes; its abundance, its power and control, its natural philosophical and political meanings were all demonstratively exhibited. Aqueducts and fountains are the best known 'framings' of water. To give just one example of the importance of these artificial framings, in antiquity and afterwards, the coastal strip of the Gulf of Naples and Baiae were famous for their baths and water facilities. Anyone who leafed through Pompeo Sarnelli’s illustrated guide to Naples, first published in 1685, was shown a series of the city’s fountains. These were the fourth of Sarnelli’s nearly 50 views, appearing immediately after the triumphal arch of the Castel Nuovo and royal palace.

From this arises broader questions: What is the role of water and water-related installations in Spanish Italy? Are there any particularities that also include the Spanish territories outside Italy? Especially in descriptions of the island of Sardinia in the sixteenth and seventeenth centuries, water, wells and aqueducts seem to play a special role—for example in Tommaso Porcacchi's description of the most important islands of the world (Le isole più famose del mondo, 1572).

The fountain of Rosella is documented from the thirteenth century. From the sixteenth century, various reports about repairs and a poem on it are preserved. In 1603, four marble statues were acquired and renovations on the whole fountain apparently began. In 1606, to follow the inscription, this reconstruction was finished. Already before, in 1594–5, twelve bronze lion heads had been commissioned for the fountain, but they were melted down again in 1607 for a bell. The marble lion heads visible today date from 1694 and were restored again in 1753. The four statues at the corners were destroyed in 1795 during riots—only one is supposedly still preserved in the town hall. The statues visible today were bought in Genoa in 1828. In 1843 the arches above the fountain and the equestrian statue were replaced. Only the lying river god is still original. Nevertheless, the overall impression of the Fontana di Rosello, as we will see immediately from contemporary pictorial testimonies, largely corresponds to the form that was finished in 1606. All orders for the fountain seem to have come from the city. Who the artists were is unknown—the assumption that they were stonemasons from Genoa cannot yet be proven.

So far, no convincing model has been found for the shape of the fountain—the reference to wooden cabinets seems to me to be misguided (Salis, 2015). The four statues at the corners have been said to represent the Four Seasons, but the figure of “Autumn” carries a club and lion fur, and must thus represent Hercules (see for earlier interpretations Cau, Ledda, and Lissia, 2002). I would interpret this as a reference to the mythical settlement of Sardinia by the descendants of Hercules, as mentioned in Porcacchi's description (Le isole più famose del mondo, 1572; cit. Padua, 1620, p. 49). The fact that St. Gavino rides on the fountain results from the close connection to his sanctuary: a twelve-mile-long aqueduct carries water from the fountain to the church San Gavino in Porto Torre. It is important to realize that not only the artistic execution of a fountain, for example, but also the engineering and technical control of the water distribution was perceived as a major achievement of the time. The river god, which is often found on sixteenth-century fountains, may seem unproblematic. However, it is unusually positioned at the top of the fountain, above the symbol of the city and the coat of arms of the king and under the strange volute arches. For this I would refer to the two recumbent gods Saturn and Bacchus in the upper register of the triumphal arch at the Castel Nuovo of Naples, misinterpretations of two river gods in Rome, which there stand for the Golden Age.

Finally, the fountain appears in two early seventeenth-century paintings of the Madonna from Sassari (figs. 1, 2). These pictorial testimonies prove that the fountain originally really looked like it does today. But they also show that the fountain had an eminently Christian-mariological significance in all its references to antiquity: in order to describe the nature of the Mother of God from the Immaculate Conception to the appearance of the Apocalyptic Woman, water and fountain metaphors were often used—the sealed fountain, the fountain of wisdom (one might compare a slightly earlier engraving, printed in Rome by Antonio Lafrery, figs. 1, 3).

However, the Fontana di Rosello not only carries this potential mariological association. In his ‘Encyclopaedia of Antiquity’ of the 1580s, an artist-humanist like Pirro Ligorio, who came from Naples, explains how water stood for the generative power of nature in natural philosophy and what the mastery and supply of water meant for the ruler. On the one hand, therefore, one must assume that the Fontana di Rosello and its aqueduct follow ideas about the representational power of water, as they can be found elsewhere in (Spanish) Italy and in Europe in general. On the other hand, the Fontana di Rosello seems to react to a competitive situation within Sardinia. In 1603 a fountain was also erected in Cagliari, of which only an inscription plate with coat of arms has survived (fig. 4). This emphasized that Cagliari was the capital of Philip III’s dominion, but also that the fountain depended on the generosity of the viceroy and was erected by the city fathers. Even the artist Scipio Aprilis is permitted to name himself. In Sassari, the other great city of Sardinia, the reaction to this construction was apparently immediate, with the renewal of the Fontana di Rosello.