A Deposition in Sardinia from the Mid-Cinquecento: Raphael, Engraving, and the Iberian Artistic Network 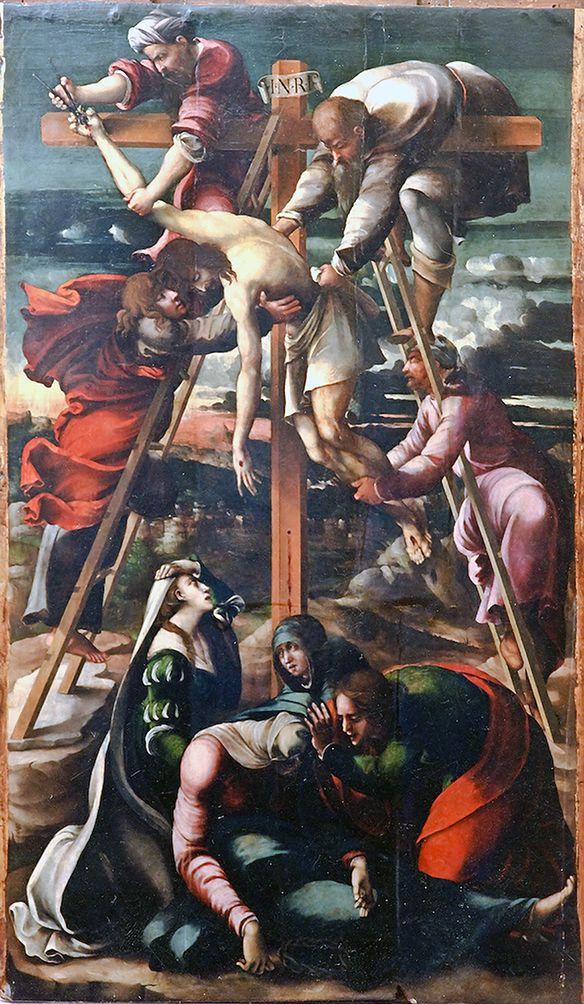 Just over a decade after Marcantonio Raimondi’s Deposition (1520-25) was printed in Rome, the engraving was used as a model for a painting (Museo di Arte Sacra, Ozieri) (fig. 1), variously attributed to the so-called “Master of Ozieri'' in Sardinia, to the Spanish artist Alonso Berruguete (when at the auction house Finarte in Milan), and more recently to an “Iberian mannerist.” Examination of this Deposition in relation to other works produced on the island in the 1530s and 40s provides insights into a transitory moment of painting in Sardinia when Raphaelism, prints, and foreign influence simultaneously shaped artistic production. This work also poses questions regarding authorship, local production, and the dissemination of style.

In the Deposition the artist closely reproduced the engraved image after Raphael, only making small alterations to the dress and poses of the figures below the cross and creating a more tumultuous scene through the addition of foreboding clouds in the background. Another painting from the same years, Way to Calvary (Museo Nazionale Sanna, Sassari) (fig. 2), which might have once formed part of the same retablo as the Deposition, clearly refers to a painting of the subject by Raphael from 1517 (Prado), commissioned for the Sicilian monastery of Santa Maria dello Spasimo in Palermo and immediately translated into print by Agostino Veneziano. Moreover, the Master of Ozieri used an iconic image from Raphael via Raimondi in his Holy Family (Quadreria Spano, Ploaghe) (fig. 3).

The fact that these paintings were created just years following the production of their related engravings makes clear that the distance between Sardinia and the peninsula did not preclude artistic exchange. Raphael permeated other works in Sardinia without known engravings as intermediaries. For instance, in some panels in the Retablo of Beneficiati (Cathedral Museum, Cagliari) (fig. 4), one can see close interpretations of Raphael and Michelangelo. This retablo has been attributed to the Spaniard Pedro Machuca (Previtali 1986), to the Master of Ozieri, and to Pietro Cavaro. More recently, it has been proposed that the painting originated from a collaboration between an Iberian Master close to Polidoro da Caravaggio and a Southern, maybe Neapolitan, Raphaelesque painter (someone close to Giovan Filippo Criscuolo).

In La Via dei Retabli, Spissu proposes that the author of the Deposition, like many Spaniards, such as Berruguete and Machuca, had trained between Florence and Rome, and that he probably arrived in Sardinia via Naples, a city that attracted several Spanish painters as the final stop during their stay on the Italian peninsula. This leads us to question the connection between paintings in Sardinia and the experiences in Florence, Rome, and Naples of Raphaelesque and mannerist Spanish painters. These artists likely worked in Sardinia during their journey back to the Iberian Peninsula or could have sent their works to Sardinia. The well-established itinerary of paintings usually included Florence, Rome, and Naples. The easiest means for transport was by sea, and the ships leaving Naples stopped in Cagliari and then proceeded to Majorca, Barcelona and Valencia. Shipments of works from Spain to Sardinia are documented as early as the fifteenth century, and were usually sent from Barcelona. It is reasonable to think that foreign artists traveled but that the link with the island was kept alive by the movement of works of art.

In the Ozieri Deposition, other foreign stylistic references that diverge from Raphael likely also derive from interactions with traveling artists. Beyond the iconographic model taken from Raimondi, sinewy and elongated forms recall the Tuscan work of Pontormo and Rosso Fiorentino. The quiet emotion of Mary in the foreground resembles the connections between figures in Pontormo’s Entombment in the Capponi chapel in Florence, while the color palette, particularly Christ’s green flesh, recalls Rosso’s Volterra Deposition.

The use of Raimondi’s print is different in the Deposition, where it is more theatrical, with the dramatic orange and purple sunset; women with insistent dark circles under the eyes and whitish cheeks that recall female figures in the Deposition by Pedro Machuca (Prado), a Spanish painter active between Florence, Rome, and Naples. It is worth noting here that in Naples, one of the centers of art production in sixteenth-century Southern Italy, the quiet Andrea Sabatini in his Deposition (Capodimonte Museum) expressed his transient infatuation for Pedro Machuca, who had just been in the city of the Spanish Viceroyalty. Similarly, here in the Deposition we seem to witness the effects of the Machuca’s period in Italy at that time.

All in all, the Deposition could be the result of a Tuscan-Roman or Neapolitan artist in Sardinia, a Spanish painter trained between Florence, Rome, and Naples, or it could be a local product related to the Raphaelism of the Master of Ozieri. However, it is difficult to define “local production,” because Sardinia, like Naples, was a site of constant exchange and a stop for transient artists. Many painters came to Sardinia from Valencia and Barcelona, while others traveled from Naples, such as the painters of the Retablo of Beneficiati (fig. 4), who effortlessly combined ideas and quotations from the Sistine Ceiling and Vatican Stanze. Because the Deposition lacks the idiosyncratic elements of the Master of Ozieri’s work that also evoke Northern Europe, the painting might be best attributed to a Spanish or Italian painter familiar with painting in Tuscany, Rome and Naples. This “Sardinian” painting reveals the complex way in which the circulation of engravings and the travels of artists throughout Spanish Italy impacted new works that share a common ground.

The broad use of prints from central Italy and the transformation of style through common references led to the creation of a constellation of significant affinities in paintings in distant centers, at times linked by the movement of the same artists. These affinities or characteristics at this time include Raphaelism, an unusual color palette, abstract background elements, and emotionally charged scenes. This short entry has also shown that in the 1530s, Sardinia’s local production continued to be permeated by foreign influence. A similar situation occurred in Viceregal Peru in the 1590s with the arrival of Italian artists, such as Bernardo Bitti, Matteo da Lecce, and Angelino Medoro, who likely traveled to the Americas via Spain. Comparative analysis of these two moments —1530s Sardinia and 1590s Peru— would help demonstrate the connections between Spanish Italy and the Iberian Americas and may reveal an Iberian style which continues to expand in the long Cinquecento. Such a future study will require a reassessment of mannerism and must question the role of prints for the definition of style.