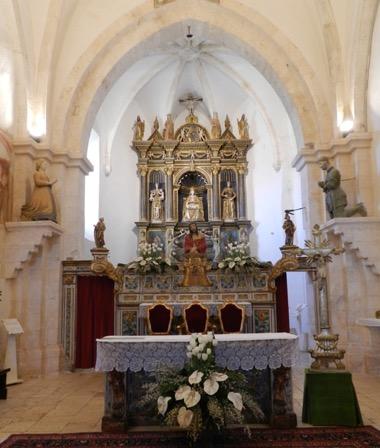 Presbyterial area of the Church of Santa Maria dell’Isola in Conversano.

The devotional and funerary setting created between 1508 and 1528 by the count Andrea Matteo Acquaviva and his wife Caterina della Ratta in the Church of Santa Maria dell’Isola near Conversano is the one surviving example of a series of scenographic displays that existed in Renaissance Apulia.

The ensemble consists of two life-size statues representing the patrons, kneeling in prayer to the thirteenth-century icon of the Virgin and Child on the high altar and towards the funerary monument of Andrea Matteo’s parents, Giulio Antonio Acquaviva and Maria del Balzo Orsini, a colossal three-tiered polyptych executed in painted stone, which stands against the flat wall of the apse.

What makes this case interesting is the spatial character of the setting, generated by the interaction of the two life-size statues with the icon and the funerary monument. Compared to images of patrons presented by saints at the bottom of paintings or as statues within church portals or tombs, the kneeling effigies in Conversano are independent figures which, freed from any frame and any saintly intercession, address directly the sacred image of the Virgin and the family mausoleum, thus creating a tridimensional display which involves the wider space of the church, in a way which recalls the more famous example of the chapel of the Succorpo in Naples (1497-c. 1511). While performing an act of permanent devotion, which was at the same time religious and chivalric, the two statues would have been repeatedly activated when the sacred host was made visible by the officiant, who prayed looking towards the altar and family tomb. Before the creation of the seventeenth-century altar, the funerary monument, which culminates in the statue of the Virgin on the throne, functioned as the main altarpiece. The church of Conversano elaborated similar settings already existing in Apulia, either disassembled or lost, the earliest of which were those of Raimondello Del Balzo Orsini in the Basilica of Santa Caterina d’Alessandria in Galatina (c. 1406) and of Giovanni Antonio Del Balzo Orsini in the church of Sant’Antonio da Padova in Taranto (c. 1438).

Interestingly, the two statues in Conversano, as well as the other still extant Apulian examples, are painted to look as if they were real, acting as powerful surrogates for the persons they represented. This feature recalls the parallel custom of creating ex-votos in the churches of Florence and Mantua, consisting of life-size kneeling portraits executed in wax and dressed with the actual clothes of the patrons, like Lorenzo de’ Medici’s statue in the SS. Annunziata, which wore the shirt stained by the wounds from the Pazzi conspiracy. Compared to the Florentine ex-votos in wax, the Apulian statues in painted stone testify to a specific interpretation of magnificence in the Kingdom, according to which stone and marble were preferred to more ephemeral materials, a local attitude noted also by Vasari.

By staging an act of double submission towards the icon and the tomb, the effigies of such powerful Apulian barons generated complex spatial settings, which established a model readily imitated by the Aragonese royals in Naples, and which was then exported first to France, as in the tomb of Charles VIII in Saint Denis (c. 1495), and then to the Iberian peninsula. The funerary setting of Ferdinand and Isabella in the Capilla Real in Granada (c. 1506-1520) and of the Gonzalo de Cordoba and Maria Enrique in the church of San Jeronimo in Granada (c. 1515) seem a direct derivation of the ones in Naples and Apulia. Not by chance, Gonzalo de Cordoba had spent two years in Apulia before the Spanish conquest of the Kingdom of Naples. One may ask if the imperial mausoleum at the Escorial (c. 1587) can be regarded as the ultimate derivation of Apulian devotional and funerary displays, such as the one in Conversano. Following up this path, it would be interesting to consider the impact of such scenographic settings, featuring kneeling statues bearing the true likeness of the patrons, also in the Iberian Americas.

Erwin Panofsky described the monument for Charles VIII in Saint Denis as revolutionary in its time, indicating it as the first of this type. As overlooked antecedents for such pioneering displays, the case of Conversano and the other Apulian samples show us how “objects ” located in areas now regarded as peripheral in art history can challenge our knowledge and interpretation of more celebrated and established works.