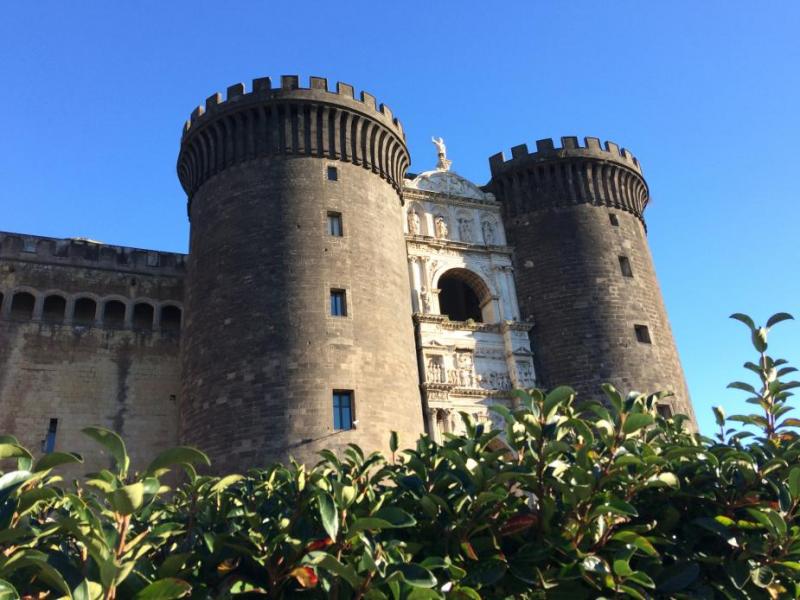 In 1282 the Castrum Novum was completed and subsequently established as the main residence of King Charles I d’Anjou. Along with Castel Capuano, it became the center of the political, ceremonial and cultural life of the court.

After the war against Rene d’Anjou in 1442, Alfonso I of Aragon conquered Naples and decided to reconstruct the almost completely destroyed Castelnuovo as a family residence, in this way taking symbolic possession of the city. Alfonso entered the city on February the 26th of 1443.

Alfonso would reinforce the castle and the city by increasing the thickness of the walls, building towers and buttresses, and most importantly, changing the former entrance to the castle (Fig. 1)—which connected it to the port—to the west, as was done in 1446.

By the first half of 1451 the reconstruction of the castle employed Marès stone (a soft, pale-colored rock), which was transported from Santanyi and Felanitx in Majorca. Antoni Sagrera, son of Guillerm Sagrera—the protomagister of the factory of Castelnuovo—and Cristofol Vilasclar were the ones in Majorca in charge of selecting, cutting and sanding the stones before sending them to Naples.

Around the same time, the quarry-masters Onofrio di Giordano, Coluccio di Stasio, Carlo and Pretello de Marino would employ the very resilient igneous rock, piperno stone (from Pozzuoli, Campania) to remake the north, west and south curtains walls, along with the corresponding towers: the Beverello to north-east, San Giorgio north-west, the Mezzo tower; and the Guardia tower to south-west. They coated the two basamenti of the Guardia and the Mezzo towers with an ashlar work a punta di diamante following the pattern performed by Guillerm Sagrera in the north-west tower.

Around 1452-1453 work began on the all’antica marble triumphal arch at the entrance of Castelnuovo. It would commemorate the victorious entry of Alfonso I of Aragon into Naples in 1443. It represents, on a first frieze, Alfonso’s triumphal entrance into the city, with his quadriga and musicians, alongside personifications of Victory and Fame.

Below the frieze is the inscription “Alfonso, King of Spain, Sicily, Italy, Pious, Merciful, Undefeated." Above the frieze, “Alfonso, the foremost of the kings, has established this fortress,” “Alfonsus regum princeps hanc condidit arcem," and on top is a second lower arch with paired columns, topped by four niches containing statues and a curved front with figures of abundance.

Among the team of sculptors working on the triumphal arch were Pietro di Martino da Milano, Francesco Laurana, Pere Johan, Paolo Romano, and Domenico Gagini, who started working from the base towards the top of the arch, before Isaia da Pisa’s and Andrea dell’Aquila’s arrival (after 1455).

In the judgement of Christoph Luitpold Frommel, Laurana could have been the author of King Alfonso’s relief; while Pietro da Milano would have helped him with the execution of the figures on the second row; Isaiaprobably carved Fernando de Aragon (Ferrante) and his military in the first row; Paolo Romano and Pere Johan might have worked in the decoration of griffins and plumes.  Frommel takes Andrea dell’Aquila to be the author of the left side of the relief (where he identifies some forms close to Donatello’s), and considers it probable that Pietro da Milano was the author of the figures of Saint Anthony Abbot and St. George; Isaia, of the Fortitude and the Virtù guerriera; Laurana, of the Justice; Gagini, of the Temperance; Antonio Chiellino of the Prudence; and Pere Joan of the statue of St. Michael (dated 1560). The completion of the arch extended until Ferrante’s reign.

Jasenka Gudelj examines the relation between Alfonso’s arch and the Sergii Arch in Pulas, for not only are the iconography, shape and style similar, but they both stand in the entrance to a fortified gate.

Today’s Castelnuovo is the result of a twentieth-century rebuilding restoration to its Aragonese style, based on fifteenth-century descriptions and images such as the Tavola Strozzi.  A major part of this work was to free it from additions like buildings, houses and warehouses made after 1734.

The interior of the Castle had varied Catalan-style sculptural and architectural elements—like the ribbed vault, the courtyard, an open air staircase, and a carachol staircase—some of which survive to this day.