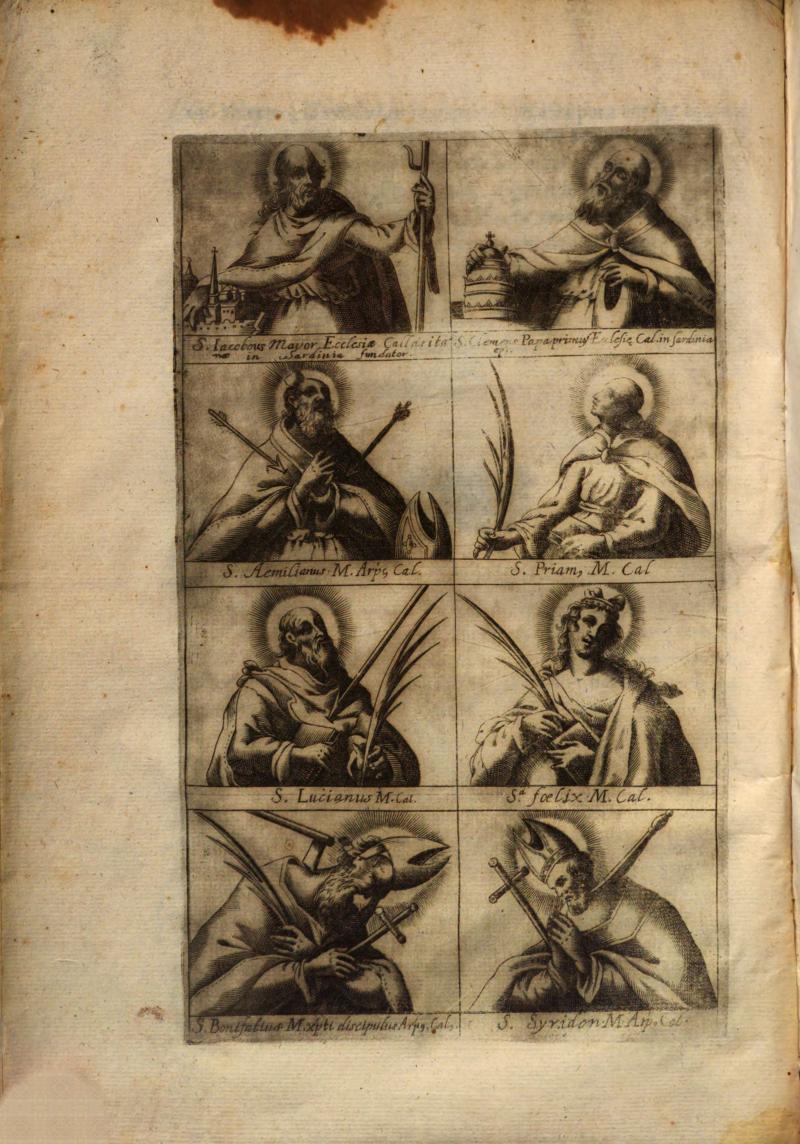 Triumpho de los santos del Reynos e Cerdeña: a la Magestad Catholica del Rey Don Phelippe IIII(Cagliari 1635) demonstrates the Spanish presence in Sardinia in the late sixteenth and early seventeenth centuries and represents a rare example of an illustrated book published on the island.  Dedicated to King Philip IV and written in Castilian, it documents Christian saints and martyrs, relics, catacombs, and monuments in Sardinia and particularly in Cagliari. The illustrations are variously achieved with letterpress, woodcut, and engraving.  The large-scale circa 600-page volume appears to be the only book by its author, Dionisio Bonfanti, a “doctor of theology and law,” though he did publish a short pamphlet two years later entitled, Breve Tratado del primado de Cerdeña y Corcega.

The Triumpho forms part of a small world of book printing and distribution in early modern Cagliari. The first incunabulum was printed in Cagliari in 1493 and by the mid-Cinquecento publishing flourished in the city under the Canelles printing press, which produced classical texts as well as compilations of catechisms, sermons, and other religious texts. The Canelles press was subsequently subsumed by the Galcerino family of publishers and the Triumpho was published by Antonio Galcerino, the son of the more renowned publisher, Giovanni Maria Galcerino (active 1590-1597). The majority of the texts printed by the Galcerino in the late sixteenth century are in Italian. An expansion of printing in Spanish took place in the early seventeenth century when Spanish became the predominant language for the island’s bureaucracy. Little is known about print runs, but the output of books on the island was modest; it is believed that some 82 books were printed in seventeenth-century Cagliari and 13 books printed in seventeenth-century Sassari, a small fraction of what was published in major cities on the peninsula.

The Triumpho documents the discovery of relics in Cagliari and makes a claim for Cagliari as the origin place of Sardinia’s saints. Thanks to the archival sleuthing of A. Katie Harris, we know quite a bit about the purpose of the Triumpho and its relation to religious politics of the time. Bonfanti was criticized by a German scholar and librarian in the Barberini circle named Lucas Holstenius who wrote extensive notes in a copy of the text at the Biblioteca Vaticana, attacking Bonfanti’s methodology, analysis, and archeological work. By 1638 the book had been placed on a list of prohibited books due to Bonfanti’s description of Lucifer of Cagliari, a fourth-century bishop of Cagliari. Bonfanti’s propagandistic text responds to local religious concerns and at the same time, as a text written in Spanish and dedicated to the Philip IV, it transcended Sardinia and found an audience in Spain and at the Vatican.

Though much is known about the context of the book’s production, many questions remain about the visual culture surrounding its images. For instance, who produced the images? What were the sources for the images? What was the purpose of the images? Visual analysis and examination of the relationship between word and image in the book reveals a Sardinian object that seeks to legitimize the island’s local Christian past and at the same time to promote its global Catholic present. For example, the opening of the chapter on the “Canonization of Saints” boasts numerous Sardinian saints with an engraving preceding the text.  In the image, eight traditional depictions of saints include bust-length portraits with their attributes which are in some cases, the instruments of their martyrdom. Captions below the portraits name the saint and “Cal,” likely referring to the city of Cagliari.  These saint portraits do not reflect a local style but rather could have been produced in Rome, Mexico or Madrid. The elongated figures and their awkward poses recall the “mannerist” aesthetic of the period. The corresponding text describes “with Triumph the invention of the Sacred bodies of the saints” and discusses their canonization in Sardinia, reminding the reader of their origins. Other images in the book document churches, sarcophagi, and reliquaries in Sardinia. Again, these images, such as a reliquary depicted in another section on martyrs, represent Sardinian antiquities and discuss them in relation to contemporary Catholic celebrations.

The book might have functioned as a “guidebook” of Catholic Cagliari for King Philip IV. Through it the reader could experience Cagliari’s major Christian sites, learn of its saints, and experience a visually appealing contemporary illustrated book that stylistically recalled publications in other regions of Spanish Italy. The book is more in keeping with such Spanish texts as Antiguedad veneracion i fruto de las sagradas images, i reliquias (Seville 1623) and Historia antiguedadese y grandezas, de la muy noble y muy leal Ciudad de Sevilla (Seville 1627) that celebrate Seville’s religious images, relics, and Christian past. Ultimately, the main aim of the book was part of a seventeenth-century fervor to authenticate relics and sought to vindicate the claim of Cagliari as the ancient seat of Christianity on the island.