Model and Medal of Ferrante Loffredo, The Scher Collection 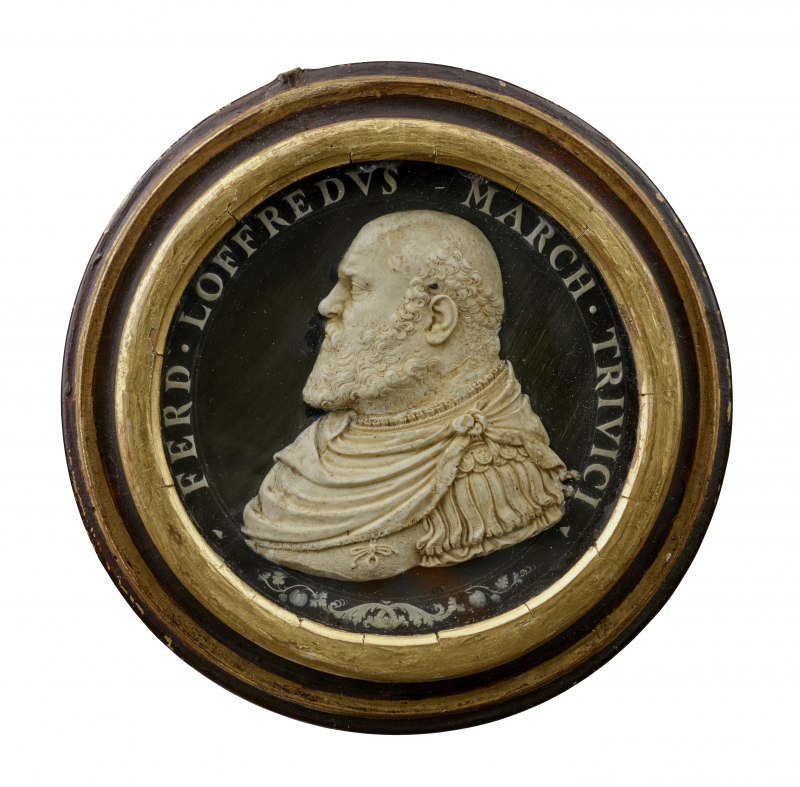 Additional image: Model for a medal of Ferrante Loffredo, Marquess of Trevico (reverse). © The Scher Collection.

Ferrante Loffredo’s medal is a small object that raises associations with works of a larger scale, as well as transnational and global reflections. The obverse depicts a profile portrait bust of Loffredo, in Roman-style parade armor, with a commander’s sash knotted on the left shoulder; it bears the inscription which recalls his title as Marquess of a town in Campania called Trevico:  “FERD[inandus] LOFFREDVS MARCH[io] TRIVICI.” The reverse features a large platform with Ferrante in Roman-style armor and cape standing on the left, while an allegorical female figure, possibly a personification of Truth, walks toward him from the far right, offering a lance at the behest of Emperor Charles V, who is positioned at the center of the scene, also in a cloak and ancient-style armor, crowned with a laurel wreath. This side bears a dedication to the divine emperor Charles V, celebrated as the truth: “DIVI Q[uinti] CAR[oli] CÆS[ari] VERITAS”.

The medal must have been executed between 1548, when Loffredo was appointed Marquess of Trevico, and 1556, when Charles V abdicated. Its author is unknown, but it has been alternatively identified with Pietro Paolo Galeotti, Annibale Fontana, and with a more generic “Milanese school.”  We are fortunate enough that together with the medal, its wax on glass model has also survived. The model is one of the few to have survived from the sixteenth century and offers us the rare opportunity to look into the material process of creating a medal. Furthermore, the white wax applied to a glass support with a dark coating allows us to appreciate the effect of translucency and the refinement in detail that disappeared in the final copper cast.

Apart from its intrinsic artistic value, the medal and its model are interesting as they open up broader reflections because of the subject portrayed, the iconographic details, and the artistic context in which it was conceived.

Born into a family of the Neapolitan nobility, Ferrante Loffredo (1501–1573) reached the highest military ranks under Charles V and Philip II, thanks to his achievements in the wars in Italy, Germany, Hungary and in the Tunis enterprise. As governor of the Terra d’Otranto and Bari (1542–1557), and subsequently as commissioner of the Kingdom’s fortresses (from 1554), Ferrante had to deal with numerous tasks relating to the territorial and urban strategies designed to improve the security of southern Italy and in particular of Apulia, one of the Empire’s main defensive outposts against the constant threat of the Turks. The numerous annotated drawings and reports relating to the defense of cities reveal Ferrante’s theoretical and practical skills in military architecture and place his work in continuity with what has been described as an “experimental laboratory” set up by Charles V between 1536 and 1537 when, on his way back from Tunis, the emperor stopped in Naples to redesign the fortifications of the Kingdom together with the main nobles and leaders who had taken part in the enterprise. Ferrante’s work as guarantor of the Empire’s defenses granted him notable incomes, privileges and titles, as those of Marquess of Trevico (1548), Chavalier of Malta (1550) and of the Grandeza de España.

The medal may have commemorated the conferral of one such title. Interestingly, the medal relates to grander scale works that Ferrante was commissioning in Lecce in those same years, as part of his campaign to transform the city into a highly representative center of the imperial power. In the palace which he built for himself, there is a direct quotation of the obverse side of the medal: the portrait there is displayed in the window entablature on the ground floor, thus emphasizing the conception of the residence as a primary form of self-representation. The palace features flat and uniform ashlar stone on the exterior and truncated pyramidal rustication in the atrium; here the heraldic proliferation announced on the outside is further enriched by an imposing family emblem, surmounted by the medallic portrait of Ferrante’s son Francesco. If the rusticated surfaces demonstrate that the patron was up-to-date with the main trends of Renaissance architecture, other details suggest his desire to reinforce his connection to the city, namely the sequence of waterleaves used to decorate the atrium’s cornice which punctually referred to Lecce’s local antiquities.

If the quotation of the obverse suggested the identification of the palace with Ferrante’s own portrait, the direct relationship to the Emperor visible in the reverse was advertised on a much grander scale in the new city gate of Porta Napoli, which he commissioned in 1548 as part of his urban interventions in the city and redesign of the wall circuit. Framed by a pair of freestanding Corinthian columns and topped by a triangular pediment featuring at the center the arms Charles V, Porta Napoli was conceived as an imposing triumphal arch, which celebrated through a long inscription the major achievements of the Emperor in the Americas, France and Africa, and at the same time Ferrante himself, as praefectus who defended from the Turks southern Apulia, naming it by its ancient name Iapigia. A further inscription celebrating the works that Loffredo carried out in the region and the city in the name of Charles V was also originally displayed on the gate, before being moved to the adjoining church of Santa Maria della Porta. Ferrante’s works in Lecce therefore project the urban dimension of the ideas visualized on the two sides of the medal. All three works let us glimpse his notable antiquarian culture, further proved by the publication of his highly successful work Le antichità di Pozzuolo (1570), where he also makes competent comments on medals.

Loffredo’s aim of representing himself as a prominent figure of the Empire, who could claim a direct contact with the Emperor himself, is proved also by the access he had to the medalists of the Milanese school, who, following the path of Leone Leoni, were at the time producing a gallery of figures of the same transnational elite. The figure of Ferrante Loffredo sheds light on a type of nobleman with military background, involved in urban and military planning, which were central in many areas of the Hispanic world, as the viceroy of New Spain Antonio de Mendoza (c.1490–1552) and later that of Perù, Garcia Hurtado de Mendoza (1535–1609).

Moreover, considering the cross references in Loffredo’s artistic and architectural commissions, the medal triggers broader reflections on matters of scale, and on how a small transportable object may raise broader associations with works of a grander dimensions, connecting the minute to the colossal. If the defense of the Empire enlarges the span to a territorial discourse, one could question if such issues of scale may also be stressed on an even wider transnational and global scale.