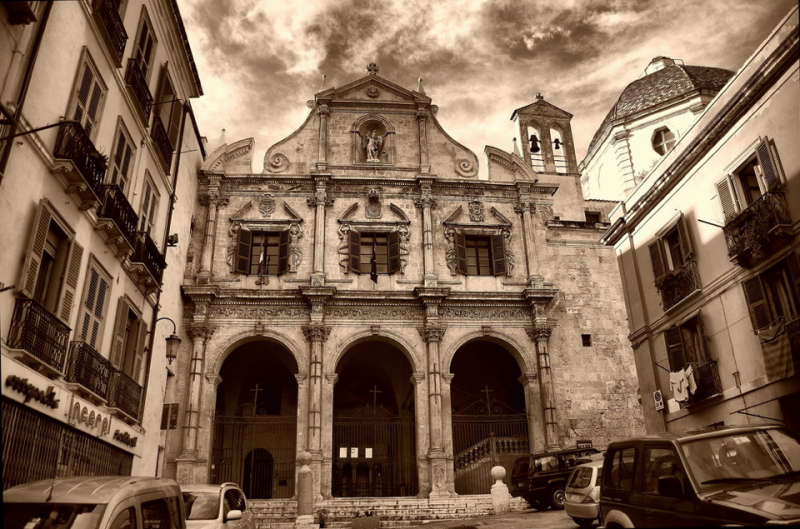 The Jesuit novitiate church of San Michele (1687-97; façade completed 1705) is considered one of the finest baroque buildings in Cagliari, yet it has a sixteenth-century pre-history about which little is known. The Society of Jesus arrived in 1559 in Sardinia, where their first foundation was a college in Sassari. Five years earlier, Pope Gregory XIII had approved the building of a novitiate on the island. In 1584, the Jesuits decided to locate their Sardinian novitiate in Cagliari and the future San Michele began to take shape on the site of an oratory dedicated to saints Michael and Aegidius. My intention in studying this monument was to learn more about the church that came to be replaced by the new one. Yet, as is the case with many buildings realized over long time spans in other Spanish viceroyalties, San Michele’s early history remains elusive.

The date of the novitiate’s transfer to Cagliari, 1584, was a propitious one for Jesuit church-building, as it was the very year the façade of Il Gesù was completed in Rome. In 1595, a prominent benefactor left funds for San Michele in his will, but there is no visual record of what actually got built in the decades to come . A noviziato dei Gesuiti—which, by definition, would have included a church—was functioning by 1674, when it was referred to by that name in the will of another wealthy benefactor, a member of the Real Udienza whose bequest led to the building from 1687 to 1697 of what was called a “new” church.

One common assumption about Jesuit churches is that their plans always evoke Il Gesù, with its longitudinal nave, side chapels, transepts, dome, and sanctuary. The late-seventeenth-century San Michele has a prominent dome, but it is a central-plan church and nearly oval in form. Its design is usefully interpreted by Emanuela Garofalo as the culmination of Jesuit experiments in church design in Sardinia since the 1570s.

Another expectation when dealing with Jesuit churches located in cities is that the religious order would strategically choose a prominent site for building, as they did in Rome and major cities from Antwerp to Naples and from Madrid and Quito. This actually came to pass in Cagliari, as San Michele was built in the populous quarter of Stampace. Like novitiates elsewhere, San Michele was composed of three principal components: a college designed around a courtyard; a residence for priests; and a church with sacristy or, in this particular case, two sacristies. Site constrictions resulted in one of San Michele’s most interesting architectural and urbanistic features: an atrium fronted by an arcade that served as the entrance to both the college and the church.

Despite the work of generations of scholars—Garofalo provides an excellent review of the literature—fundamental questions about San Michele’s construction remain. Documentary research has mined local archives as well as central repositories for the history of Jesuits and their architecture in Rome and Paris. A couple of significant Jesuit architects emerge as active in Sardinia in the late sixteenth century, Giovan Domenico de Verdina and Giovan Maria Bernardoni,  but their roles there were often fleeting, leaving actual construction to be overseen by local builders whose names are mostly unknown. Bernardoni, for instance, was involved in the original design for a novitiate prior to its relocation to Cagliari. Yet, for San Michele, names of artists and architects have only been identified for the eighteenth century and later.

The state of knowledge about this building located in a viceregal capital is not unlike what one often encounters in the viceroyalties of the Americas. There, too, it is often difficult to specify circulation routes of architectural expertise. Much of the art historical scholarship about baroque architecture in Sardinia relies on comparative analysis with architectural developments in Rome, Piedmont, and Spain primarily, but also farther afield. In this way, scholarship in Sardinia seems to have always embraced a wide geography for its field of inquiry. The design of the novitiate complex at Cagliari corresponds to other Jesuit novitiates, yet scholars remain struck by the novelty of its church. The consensus about the design of San Michele is that it was informed by Spanish practice and shares many characteristics—architectural and ornamental—with churches in colonial Latin America. Of special significance to the Spanish Italy and the Iberian Americas project, the history of San Michele reveals the importance of institutions—in this case, the Society of Jesus—and their agency in building monuments across an empire.